At twelve noon Central Time in Paxton, Illinois, eleven-year-old Caiden Riecks, Captain of this years’ Harry Moon’s Good Mischief Contest, announced the one hundred global finalists. The announcement may have come from the plains of the Midwest, but the Good Mischief Contest has now become a major international competition with children from ten countries participating.

“The response to the contest has exceeded our expectations,” said Thom Black of Rabbit Publishers of Chicago. Rabbit publishes the acclaimed Harry Moon Series. “While we always viewed this a worldwide event, we expected this to be an American-centric contest. We are delighted to see children throughout the world wanting to emulate Harry Moon’s kindness. These kids give us hope for a more peaceful tomorrow.”

Good Mischief is described as “kindness that surprises”. Entrants into the contest described a Good Mischief Feat that would carry-out if they won. The finalists will now video their feat of kindness, and upload their video to the Internet. Viewers around the world can vote through Facebook, Instagram, YouTube, or the Harry Moon website.

“The children have some wonderful ideas involving ecology, health issues, and social justice. They are finding imaginative ways to do good. We adults are going to be bowled over by our children,” said Mark Andrew Poe, author of the Harry Moon books. “They are going to be teaching us what it looks like to be kind.”

In front of a throng of children and adults, standing atop the Paxton town fire truck, Caiden Riecks, in his “Do No Evil” T-shirt made famous from the Harry Moon series, announced one hundred children going forward in the competition. The eleven-year-old said the decision for these one hundred was based on creativity and impact.  The finalists hail from ten different countries including the United States, Canada, Australia, France, England, Scotland, Serbia, Bosnia, Paraguay and China. In America, thirty-three states are represented. 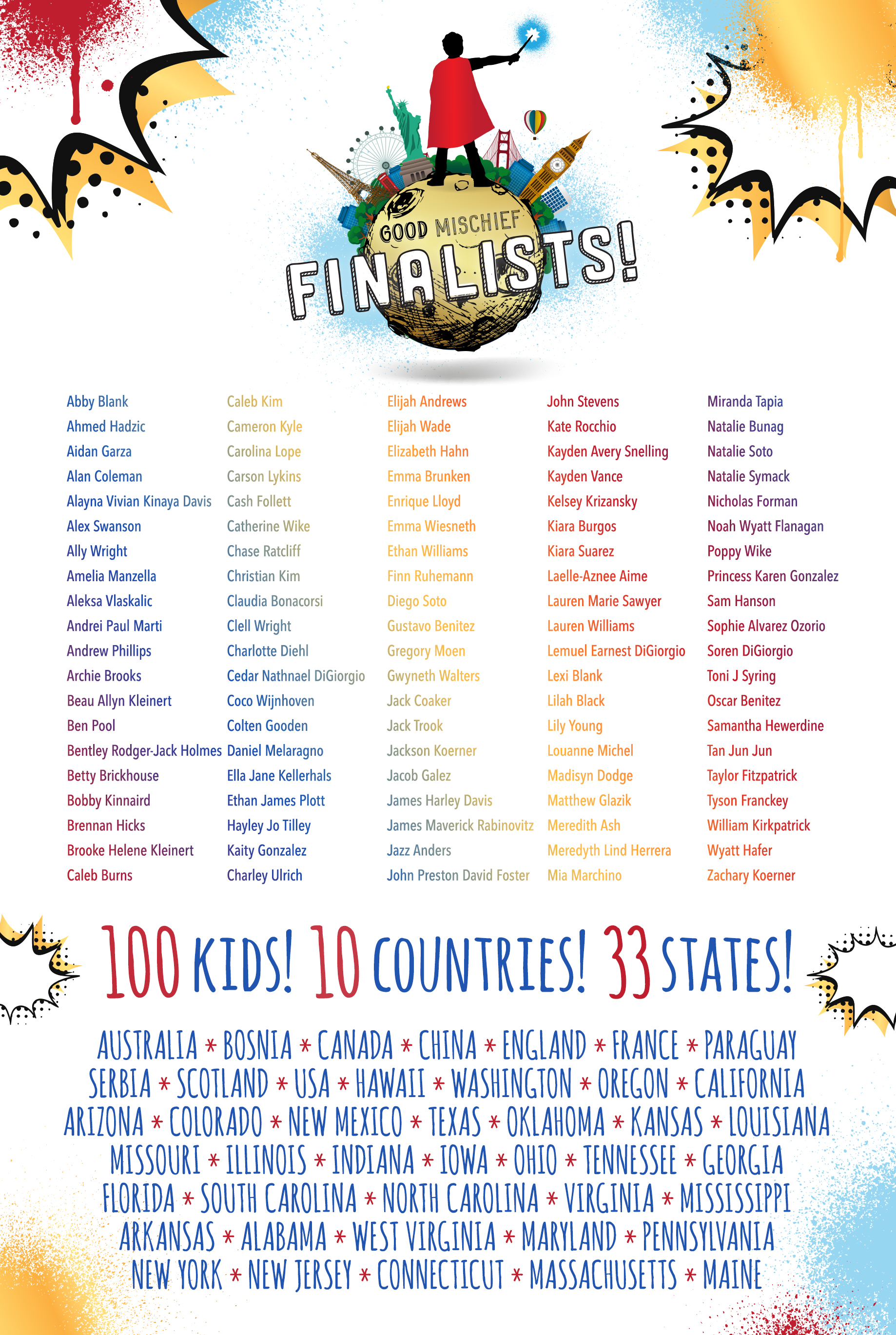 The announcement came at the height of Paxton’s annual Swine-and-Dine Barbecue cook-off with over three thousand people in attendance. The town was dressed for the announcement with sixteen banners flying over the streets of the Illinois town with sayings from the Harry Moon books series including “Do No Evil”, “Be Good. Do Good,” and “Where Heroes Come From”.

“In Wand-Paper-Scissors, the town is trapped in Halloween,“ said Caiden Riecks, also an avid reader of the Harry Moon series. “One of Harry’s friends is a kid named Hao Jones. Is he black or Asian or who is he? Harry Moon says, ‘what does it matter?’  Harry calls Hao a ‘world child’. That’s what I was thinking when I announced our finalist, Tan Jun Jun. In Good Mischief, we don’t care. We just want to be friends and we want to be friends with the people of the world.”

Finalists can post their sixty-second videos whenever they are ready but before the deadline of October 15th. Rabbit has brought in former Walt Disney Production Chief, David Paul Kirkpatrick, to coach the kids on their videos. Voting will continue until Halloween night when Caiden will return to Paxton to announce the boy and girl winner of the grand prize.

“I call the trip they win the “Hero Trip” because the two winners will be flown with a parent to Baltimore, Maryland where they will take a tour of the Geppi Entertainment Museum,” said Caiden. “It’s where a lot of comic book memorabilia is kept including stuff from Superman and Batman. Those guys are heroes because of the good they do. That’s a hero to us. I guess that’s what this Good Mischief contest is all about. Be good. Do good.”

Rabbit Publishers is the Chicago-based publishing house behind the acclaimed Harry Moon and Honey Moon book series. The house has over 300,000 books in print. The publishers new color editions, Wand-Paper-Scissors, Dog Daze, and Halloween Nightmares are being distributed worldwide through Diamond Comic Distributors.